Fast facts:
– A pair of peregrine falcons successfully nested on the Sault Ste. Marie International Bridge this spring.
– The International Bridge Administration (IBA) webcam showed a pair of chicks hatched at the nest site on May 31.
– The IBA “FalCam” can be accessed at http://www.saultbridge.com/falcam. 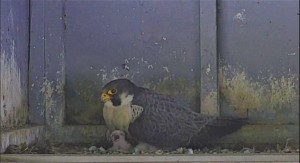 Archived FalCam video of the chicks hatching is available at http://www.youtube.com/saultbridge.

Since the live FalCam video stream, viewable at http://www.saultbridge.com/falcam, went online, the IBA has seen website usage increase by 46 percent. The camera came online this spring just in time for the seasonal return of the endangered raptors.

“We’re very happy to see the birds have successfully hatched two chicks this year,” said International Bridge Engineer Karl Hansen. “This continues a long history of the peregrines successfully reproducing at the bridge. We’re also happy to see the new nest cam is proving to be such a popular way for people to watch the birds.”

Last year, the same pair of peregrine falcons successfully nested on the International Bridge, hatching four chicks. The site has hatched 24 falcon chicks since 2010, when the nest box was installed and IBA staff started counting the birds, Hansen said.

Birds have also laid eggs in a nest box on the Portage Lake Lift Bridge between Houghton and Hancock. Webcams, viewable at http://pasty.com/nestbox.html, have been installed there in cooperation with the Copper Country Audubon Club to allow people to watch nesting activity.

Michigan lost its peregrine falcons in the 1960s and 1970s due to the use of DDT and other environmental contaminants. Since conservation efforts started in the mid-1980s, the number of peregrine nests has slowly increased. Now there are about 40 falcon pairs actively trying to nest statewide, with one to two new pairs discovered most years.

The peregrine falcon has been removed from the federal endangered species list, but is listed as an endangered species in Michigan, protected by state and federal law. Peregrines have adapted to city habitats, nesting on tall buildings, smokestacks and bridges around the world.

This entry was posted in Bridge, Peregrine. Bookmark the permalink.